Water resources are becoming increasingly scarce, especially in countries within the region that do not have access to sanitary water.

Local authorities in Qatar have developed a conservation plan with all major district cooling companies in the country, who have access to readily available TSE to switch from potable water to TSE.

Treated Sewage Effluent (TSE) in the Middle East and other Gulf Countries is a resource that is under exploited, with forty to sixty percent discarded to the sea without being utilized.

In the District Cooling Industry, this excess water can be used in two ways. The first method is the direct usage without any dilution in the condenser water system. The addition of certain water treatment chemicals, with minor construction and MEP works, makes the conversion inexpensive with low maintenance and simple operations are required to protect the condenser water system. These are monitored and controlled to the point where the blown down water is discharged to the surface water network, and finally into the sea, all with the requirements set out by the Ministry of Environment.

Alternatively, TSE polishing plants can be provided in new plants or in existing plants where space and power is not an issue. The polishing plants use the same TSE water which s cleaned and treated through the process of Reverse Osmosis, to obtain water parameters similar to potable water.

However, the polishing system has other drawbacks since there is a large volume of reject water that needs to be discharged into either, the sewer network or the surface water networks. In either case the reject needs to be diluted to meet the relevant authority requirements. There are also other considerations when using polished water and are essentially operational (electrical costs), servicing and maintenance costs.

In general, when using potable water or polished water the cooling tower operates on a cycle of concentration (COC) of approximately nine, and in a cooling plant where direct TSE is used the plant operates on a maximum of three cycles, before being discarded into the sea.  The use of TSE in district cooling, regardless of the COC decrease is still better for the environment and the saving of resource.

Regardless of the method in which the TSE is used as makeup in the condenser water system the overall usage of TSE water per Refrigeration Ton is the same outcome. Therefore, TSE is a commodity that should be extensively and properly used without being restricted to irrigation.

Below is a typical diagram outlining the implementation of TSE in a district cooling plant. 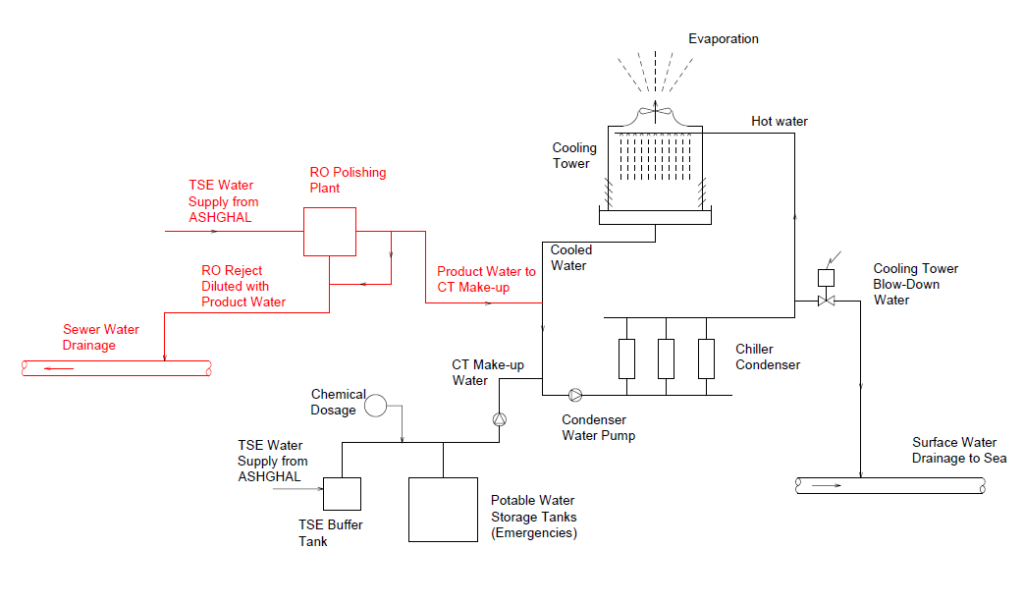